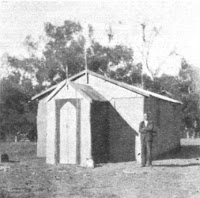 Raymond Charles 'Charlie' Runga was a son of Charles Runga and Eliza Runga (nee Bourne). Charles, a widower, had married 21 year old Eliza in 1887 when Charles was 44. Charles was a renowned railway ganger and ploughman, having been the first Aboriginal man to have competed in a ploughing match at Mt Barker Springs in 1865. It was believed that Charles was originally from Tjowilla/Chowilla country north-east of Renmark. Charles subsequently worked on the Kingston SE to Naracoorte railway line in the years before Charlie's birth, and Charlie was born at Naracoorte on 21 September 1889. He had two brothers, Arthur, who died in infancy, and Frederick.

Charlie worked as a farm labourer prior to the First World War, and had been working at Hopetoun in the Wimmera region of Victoria when he enlisted at Mildura on 28 February 1916. After some much needed dental treatment, Charlie embarked with the 17th reinforcements to the 6th Battalion (a Victorian-raised unit) on the Euripides at Melbourne on 4 April 1916.

They spent two weeks in Alexandria before re-embarking for England on 31 May, arriving at Plymouth on 12 June 1916. After intensive training in England, Charlie embarked for France on 22 October, finally reaching the 6th Battalion on 29 December 1916 where it was performing rear area fatigues near Albert.

In late January 1917, Charlie entered the trenches for the first time near Albert, and the battalion rotated in and out of the front line in February and early March. Charlie went sick in mid-March 1917 with scabies, but returned to the unit in early April for intensive training due to a reorganisation of the battalion structure. They spent more time in the trenches near Frémicourt, after which the battalion participated in the Second Battle of Bullecourt in May, and the Battle of the Menin Road in September.

Charlie was wounded in both arms on 26 October 1917 on the first day of the Second Battle of Passchendaele. He was sent to England to recover, and stayed there until May 1918 when he returned to France. He participated in the Battle of Amiens, then was gassed on 23 August 1918 after the battalion's attack near Herleville Wood as part of the Second Battle of Bapaume. Charlie was again evacuated to England. Whilst in England he received news that he had been awarded the Military Medal for his actions at Herleville.

Charlie had been recommended for the Distinguished Conduct Medal, but was awarded the Military Medal instead. The citation read:

For conspicuous gallantry on the 23rd day of August 1918 at Herleville wood. During the attack, when the left portion of his company had come under exceptionally heavy machinegun fire from a wood in front, this soldier taking charge of a small party dashed forward to the wood and succeeded in capturing two hostile machineguns and their crew of 16 men. On another occasion, later on in the day, this soldier rushed forward alone over 70 yards of ground without a vestige of cover and despite point blank machinegun fire succeeded in bombing the enemy from a communication trench, thus enabling the remainder of his platoon to continue their advance. This latter feat was a heroic example of utter disregard of personal safety and the desire at all costs to worst the enemy, any man of which with one shot calmly aimed could have killed Private Runga.

On 24 January 1920, Charlie was presented with his Military Medal at Government House, Melbourne. Shortly afterwards he was passing his medal around a group of men in Swanston Street when the medal was not returned. It is not known if he ever received a replacement.

His mother Eliza remarried after the death of Charlie's father. Two of Charlie's half-brothers also served in the First World War, Arthur Henry Fox (who survived the war) and Samson Daniel Fox (killed serving with the 38th Battalion in May 1917).

After the war, Charlie returned to the Wimmera, but then travelled widely, in 1933 he was in Moree. Charlie was church deacon and treasurer at Darlington Point church in the Griffith region of NSW, and helped to build the first church (pictured) in 1937, and rebuild it in 1944-45. He married Emily Glass (nee Kennedy), a Wiradjuri woman, who already had several children from her previous marriage. Emily died not long after her son Jack passed away in 1940. Charlie offered to help at other missions, and built and maintained churches at Cowra and at Moonahcullah mission near Deniliquin in the 1940's.