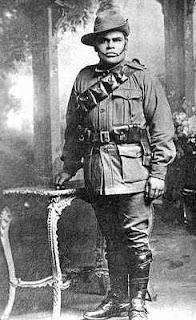 Alfred Cameron was a son of Alfred Cameron and Jessie Cameron (nee Forrest). He was born at Brinkley Station near Wellington on 17 May 1890.[1] His father was a shearer and highly respected foundation member of the Australian Worker's Union.
Before the war, he worked as a labourer in the Meningie district. He enlisted at Oaklands on 15 January 1915, and was allocated to the 8th reinforcements to the 3rd Light Horse Regiment. After seven months training, Alfred embarked on the Morea with the rest of his reinforcements at Adelaide on 26 August 1915.
He joined his unit on Gallipoli on 13 November 1915, just as winter set in, with cold biting winds and snow falling for days. Thirty freezing days and nights later, he embarked with the rest of the Regiment, returning to Egypt via Alexandria just before Christmas.
The 3rd Light Horse Regiment, along with the rest of the 1st Light Horse Brigade, was allocated to the Western Frontier Force immediately after Christmas. The Western Frontier Force was deployed to counter incursions into the Nile Delta area by the Senussi tribes, and Alfred and the rest of the Regiment operated out of a camp near Wadi Natrun about 50 miles west of Cairo. Whilst there, Alfred came down with the mumps, and spent most of February 1916 in hospital.
In early March, not long after Alfred had returned from hospital, the Regiment entrained for Girga, about 300 miles south of Cairo, and commenced patrolling to stop the Senussi from approaching the Delta from the western oases. Their time in around Girga was very uncomfortable, as sandstorms were frequent and sandflies thick. They remained in the area until mid-May 1916 when they were relieved to return to Cairo by train. Within a few days they were riding towards the Suez Canal, and after a few days supporting the British infantry along the Canal, were sent into the Sinai desert to the town of Romani. By mid-June, the Regiment was having intermittent contact and skirmishes with Turkish patrols.
In early August 1916, the 3rd Light Horse Regiment defended bravely for two days against the attacking Turks during the Battle of Romani suffering 14 killed, 36 wounded and 4 missing. Nearly 100 horses were killed or missing. Alfred lost his horse along with everything on it. The Regiment, along with the rest of the 1st Light Horse Brigade, then followed up the retreating Turks, capturing Katia and pressing the Turkish rearguard. Returning to Romani in late 20 September, Alfred was awarded a week's field punishment after being caught lying down on sentry duty. In October the Regiment was sent back to Cairo for six weeks rest and refit.
In late December 1916, the Regiment raided El-Maghdaba deep in the Sinai, capturing 284 Turks. After two nights without sleep, the Regiment rode back to El-Arish on the coast, many of the troopers recounting hallucinations of houses and barking dogs on the ride due to lack of sleep.
In mid-January 1917, the Regiment raided Rafa, on the border of Egypt and the Ottoman Empire, but suffered 59 casualties before withdrawing back to El-Arish.
In February 1917, Alfred was transferred to the 1st Machine Gun Squadron, which worked in direct support of the 1st Light Horse Brigade, which included the 3rd Light Horse Regiment. After several weeks training, Alfred returned to El-Arish where the Squadron made camp. After a period in and out of the front line near Rafa, during which the 1st Light Horse Brigade suffered more than 50 casualties and 100 horses killed or wounded, Alfred was court martialled in July 1917 for refusing to take horses to water when ordered. Initially sentenced to four months imprisonment with hard labour, this was commuted to two months which he served at No. 1 Detention Compound, Moascar, in Egypt.
Rejoining the Squadrion at Rafa beach in early October 1917, he served until 28 October when he was admitted to hospital for a week, then again to hospital in early November with a corneal ulcer. After some training in Egypt, he didn't return to duty with the Squadron until May 1918, when the Brigade was in Jericho. The Brigade repelled a Turkish attack in mid-July 1918, suffering 21 casualties, the 3rd Regiment alone taking 358 German and 67 Turkish prisoners. After a bout with sandfly fever in August 1918, Alfred rejoined the Squadron in late September 1918, at which point the entire Brigade had been brought to its knees, not by the Turks , but by malaria. In early October 1918, more than 500 men of the Brigade were evacuated with the disease. Alfred was back in hospital himself by late October, and didn't return to the Squadron until May 1919. He embarked for Australia later that month, and was discharged in Adelaide on 26 August 1919, four and a half years after he enlisted.
After the war, Alfred worked a number of jobs including shearing, horse breaking and fishing, and spent most of his life working on the Cameron family properties on the Coorong near Meningie. His mother Jessie Cameron died in 1928, and his father Alfred Cameron senior, in July 1949 at the age of 89. Alfred Junior died a few weeks later at the age of 57, and was buried in the Meningie cemetery.
Photograph: from Ngarrindjeri ANZACs by Doreen Kartinyeri, p. 18.