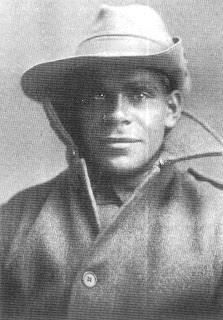 Miller Mack was born at Point McLeay in 1894, his parents were John Mack and Margaret 'Pinkie' Mack (nee Karpany)[1]. He worked as a labourer prior to enlisting at Adelaide on 23 August 1916.
After initial training at Mitcham Camp (located in present day Colonel Light Gardens), he was allocated to the 7th reinforcements to the 50th Battalion. The 50th Battalion was a South Australian battalion, the sister battalion of the 10th Battalion, which was the first battalion raised in South Australia for service in the First World War. He sailed to England with the rest of his reinforcements, leaving Adelaide on the 'Afric' on 6 November 1916, and arriving at Plymouth, Devon on 9 January 1917. Miller was sick during the voyage, and spent some time in the ship's hospital.
After disembarking in England, Miller and his comrades were sent to the 13th Training Battalion at Codford in Wiltshire for further training in trench warfare. During his four months training, Miller spent several weeks in hospital with colds and influenza. In May 1917 he boarded a ship for France and after moving through the various depots, was taken on strength of the 50th Battalion at Buire, northern France. A few days later, the battalion boarded a train at Albert, and were transported to Flanders in Belgium.
In early June 1917, the 50th Battalion was part of the Battle of Messines. On 7 June 1917 at 3.10am, nineteen enormous 'mines', large tunnels filled with explosives, were exploded beneath the German trenches between Messines and Wytschaete, which instantly killed approximately 10,000 German soldiers. This is believed to have been the largest man-made explosion in human history until the test of the atomic bomb in July 1945.
The troops which rushed across the craters included Miller Mack and the rest of the 50th Battalion who were supporting the second phase of the attack. They captured all their objectives, the Germans having been completely stunned by the force of the explosion and the following artillery barrages and attacks. Thousands of Germans were captured.
The 50th Battalion followed up with a night attack on 10 June, which captured more enemy trenches. The battalion suffered 157 casualties during the Battle of Messines.
Miller was evacuated to hospital in early July 1917, still suffering from a persistent cough which he just couldn't shake. He was admitted to hospital in England on 17 July with severe bronchial pneumonia, and by September had lost nearly 20 kilograms in weight and been diagnosed with tuberculosis. In late September he was shipped back to Australia to be discharged as medically unfit, but needed hospitalisation at Torrens Park and then at the Nunyara Sanatorium at Belair prior to being discharged in May 1918. He returned to Point McLeay in November 1918, but was very unwell. He was admitted to the Bedford Park Sanatorium for returned soldiers with tuberculosis, where he died on 3 September 1919, almost exactly two years after his diagnosis with the disease.
He was buried the following day at the West Terrace Cemetery, just outside Light Oval which had already been set aside for the AIF Cemetery. His funeral costs were paid by the Army.
In January 1920, Mr Mat Kropinyeri wrote to The Register newspaper asking for donations to build a memorial for Miller at the cemetery, as his grave had no headstone. At that time, he was the only Aboriginal returned soldier buried in West Terrace cemetery. In response, a donation of several pounds was received by The Register from the patients at the Bedford Park Sanatorium. They wrote that he had a "kindly and manly nature, he endeared himself to us all, and when he 'went west' we felt we had lost a dinkum pal. Those of us who knew him in camp and abroad can testify to his sterling qualities as a soldier and a man."
In the end though, it was the Office of Australian War Graves that placed a marker on his otherwise unmarked grave. 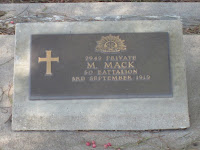 Photograph of Miller Mack: from Ngarrindjeri ANZACs by Doreen Kartinyeri